What the color of mucus – or snot – means is very misunderstood! After 10 years of practicing as an Emergency Room Physician, I find myself having to explain to my patients that the color, whether green, yellow, white, black, red or clear does not indicate a bacterial infection and a need for antibiotics.

So what does the color of your Mucus – Snot – mean?

Mucus is a liquid gel made up of mucin, protein and infection-fighting substances. It overlies the layer of your nose and helps trap and clear dust, allergens, bacteria and viruses.

Clear/White mucus – Mucus is typically clear, however, many things including ingesting a plate of spicy foods (Jalapeno, wasabi!!) can trigger a rapid anti-histamine release and cause your mucous lining to go into overdrive.

Green/Yellow mucus – Green/Yellow mucus is a sign that your body is working hard to fight an infection. The tinge is from a large quantity of white blood cells that have arrived on the scene to help battle the bug. When they die, they leave behind a green-colored enzyme that tinges your mucus. These white blood cells have enzymes that are usually shades of yellow and green.

Black mucus – Usually seen in the mucus of smokers or individuals exposed to dusty environments.

Don’t be alarmed by the color of the mucus coming from your nose and chest! Allow your physician to determine if your illness is an allergy, viral or bacterial. 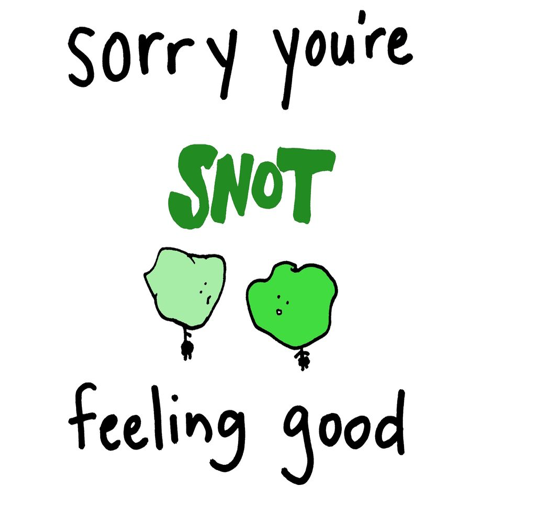 That determination is made by exploring your other symptoms: fever, body aches, nasal congestion and length of symptoms and NOT JUST THE COLOR OF YOUR MUCUS!!!